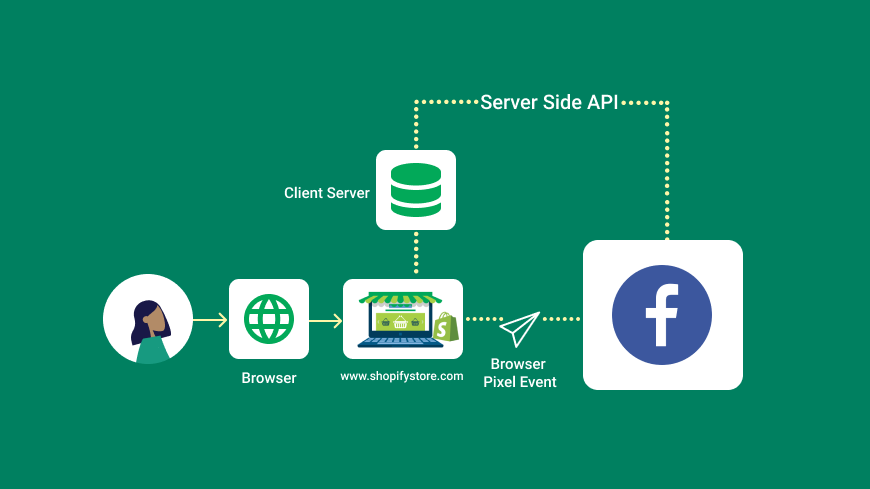 As marketers, if you’re running Facebook ads, it is important to track your data to measure the performance of ad campaigns

Only if you can measure the performance of ad campaigns, you can optimize & improve conversions and increase revenue further.

With browsers blocking third-party cookie tracking and with the latest announcement on the iOS’14 update, Apple has given the freedom of choice for users to opt-in/ opt-out from apps tracking. Many advertisers anticipate that a huge number of users will opt-out of app-tracking. In absence of the app-tracking information, it’s going to be hard for advertisers to track the data and measure the performance of their ad campaigns. 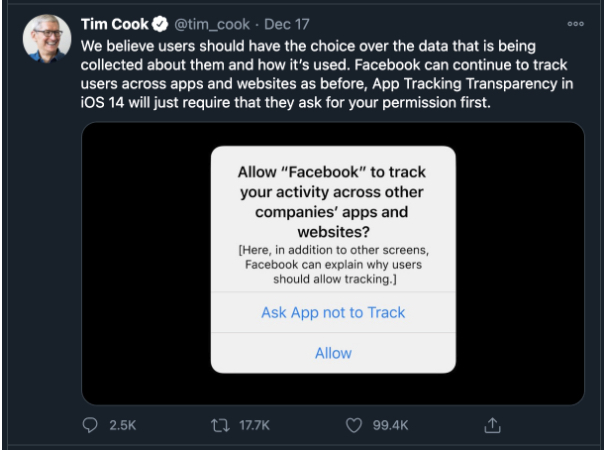 As of 2020, Facebook is the largest social media platform globally with 2.6 billion active users worldwide and India is the top first among the world countries and followed by the United States. Similarly, there are around 1.65 billion active iOS users as per Tim Cook’s recent update, with the US ranking on top followed by China and Europe having the greater market for Apple.

Shopify is one of the popular e-commerce platform that has around 2 million stores, it’s a no-brainer that Shopify store owners run ads on Facebook and their customers would probably be using Apple iPhones as well and they are going to be affected by these updates well.

The solution is to implement Facebook Conversion API for their Shopify store. 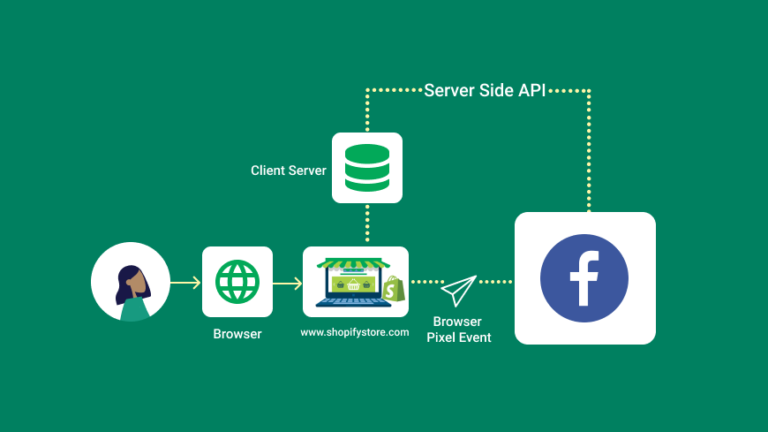 The browsers and ad blockers are blocking requests made by Facebook. And Facebook has started using aggregated event measurement to prioritize events fired by pixel from the website.

To overcome these challenges, the recommended way is to start sending the data through the server. 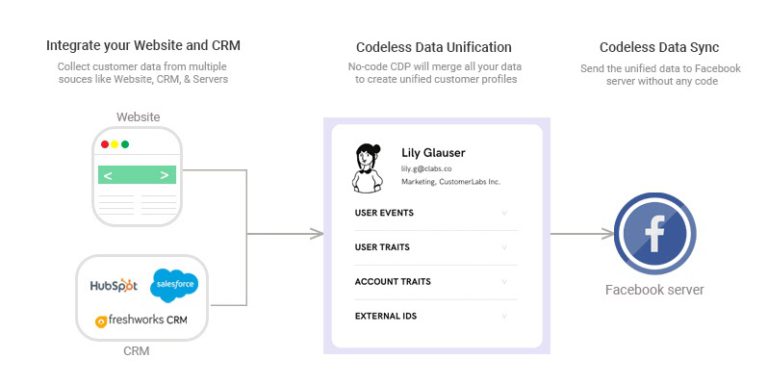 We use our no-code event tracker to track the events on the Shopify store and send the events data through server-side API / Facebook Conversion API.

As soon as the event is configured, the event data will start firing to the Facebook pixel. However, if you’d like to send the data through server-side or Facebook Conversion API, you just have to toggle between the on and off switches.

👉 Authenticate Facebook and switch on the server-side send data.

Map the Facebook fields with the data collected. This data mapping helps Facebook match the audience data sent from the server and improves your event quality score 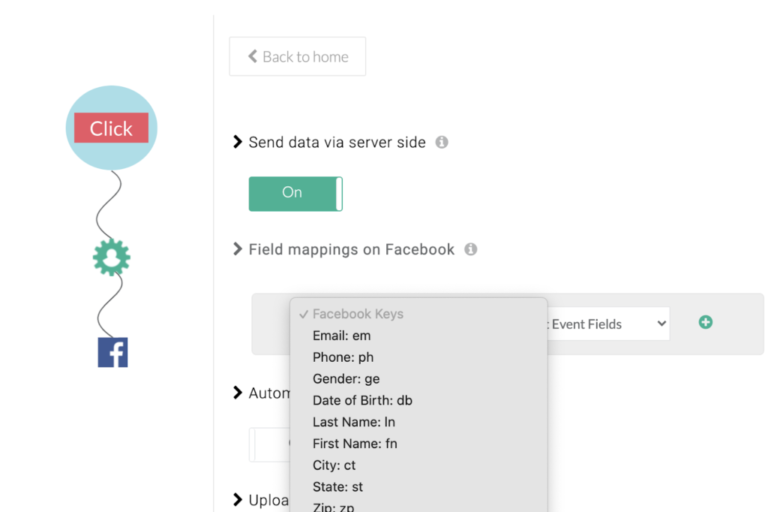 Switching off client-side and on server-side

Finally, you should switch on the event you’d like to send from the server-side. Once you do that, Facebook pixel will start receiving the data via Conversion API. 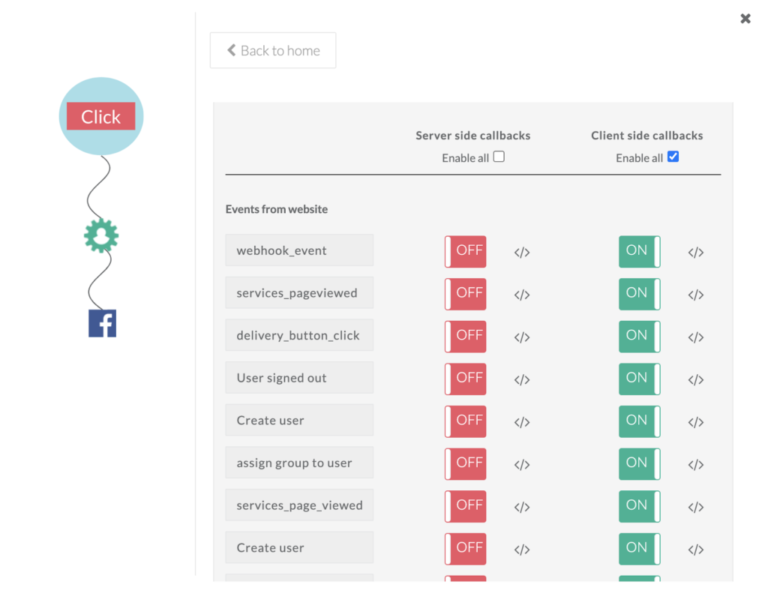 If you want to customize event data for eg: variables and content IDs, you can open the code window and write a call back function that allows you to customize the event the way you want.

And when we send data to Facebook, we automatically add these IDs to the visitors’ data and this has improved our match rate for up to 4x (Our match rates are quite high of about 70 -95% when compared to the normal match rates of 15% – 3 0%)

The above process is automated, there’s no need to set up anything. 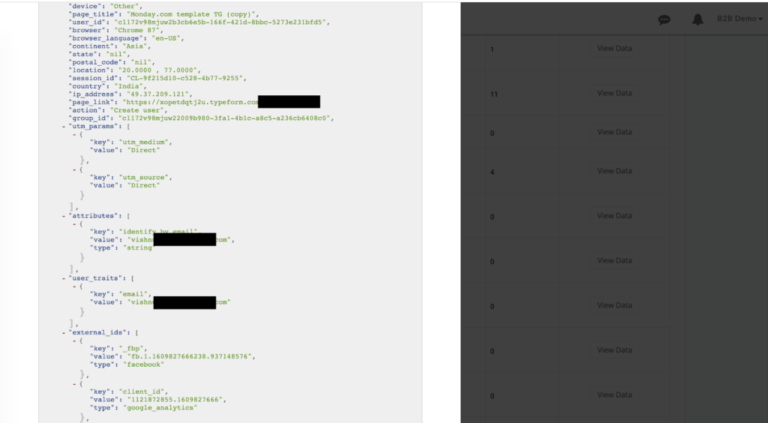 Integrate your CRM With Facebook through FB conversion API

In fact, Facebook conversion API lets us, marketers focus on full-funnel metrics unlike earlier. We can now push the data from your server and CRM to map the entire funnel.

It is important to note while sending the data from your CRM the events should include as many parameters as possible to match the event to a particular Facebook account.

The below image is an example of how an event can be mapped to a particular user. In this instance, we are bringing the data from Salesforce, and mapping the user identity as email and other data received are identified as event attributes. 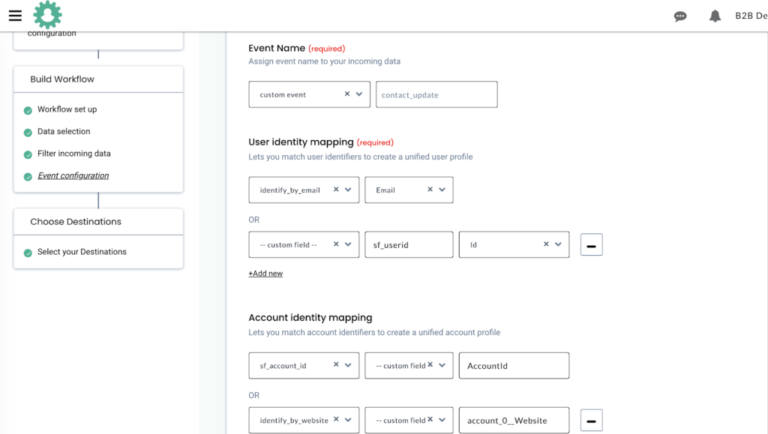 Once the event is named, you’ll start receiving data from Salesforce which can be mapped as event attributes. 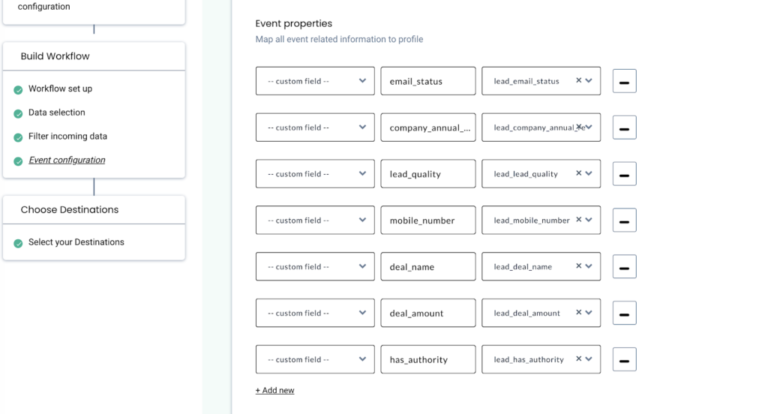 CustomerLabs CDP will build an event based on the input data and transform the event in a way that Facebook Conversion API accepts.

As you can see below, CustomerLabs brings the data from Chargebee, CRM, and other marketing systems and syncs the data with Facebook.

In the dashboard given, you have the option to toggle between the on and off switches to decide which event to be sent and what’s to be excluded. 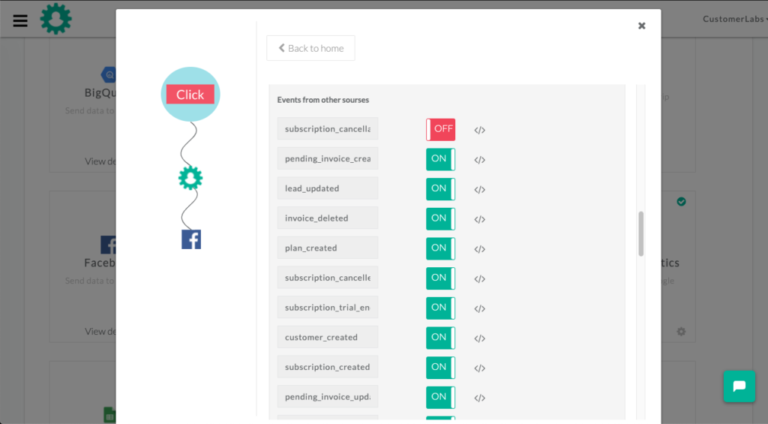 Facebook receives the data in realtime, with all the attributes/parameters which can be used to create custom audience to engage them with personalized content.