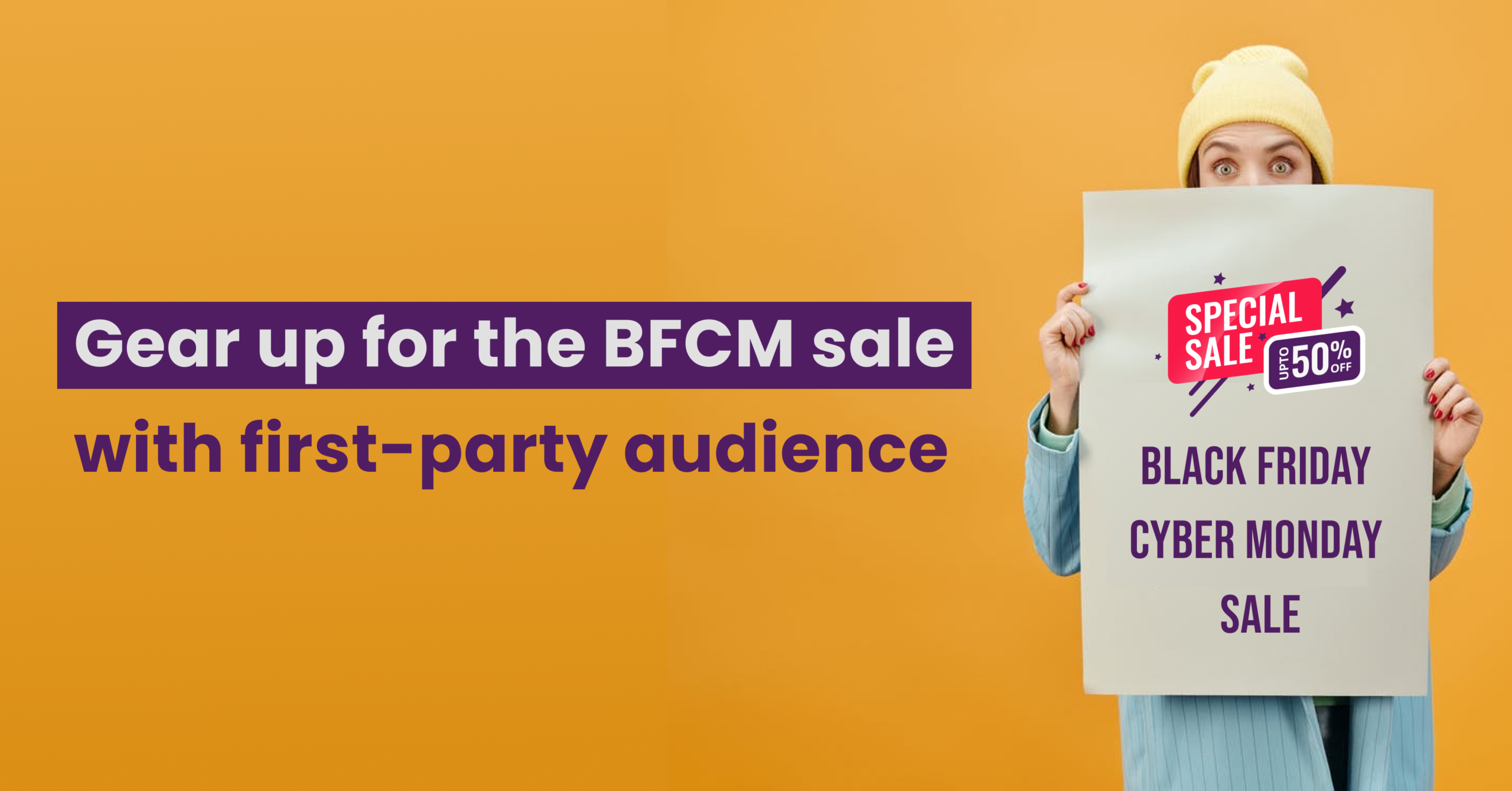 Any e-commerce brand would be looking forward to cracking BFCM campaigns as they drive most sales. Last year BFCM campaigns saw a spike in sales and ad campaign spending. As per a Salesforce report in 2021, the BFCM online sales made a whopping $62 Billion.

But the ad platforms’ campaign performance did not look like the BFCM’20 sale was a great hit though.

Although Meta/Facebook had a disproportionately high share of ad spend by e-commerce brands, according to Common Thread Collective, around a 7.14% increase was noted in CPMs. Another report of Wayflyer stated a decline of ROAS, which was about 38%, from 3.43 in 2020 to 2.49 in 2021.

With privacy and user consent being the eye of the storm, data sharing is being restrictive to ad platforms. Apple’s iOS’14+ updates and Google’s Android privacy policy restricted the user behavior data sharing which messed with the Facebook Ads algorithms and CPMs hit way higher.

Traditionally marketers used to send data to the Facebook pixel. Eventually, Facebook was doing its magic to get the high intent audience who were ready to buy. With limited data sent and limitations towards third-party tracking, Facebook algorithms are finding it challenging to optimize for conversions.

Still, Facebook is the best platform to attract the top-funnel campaign

With all the recent changes, Facebook still proves to be the best platform to attract a top-funnel audience. The problem is we keep spending money to attract top-funnel audiences. Whoever has landed on the website, showed intent i.e. browsed our products, spent some time on our website cannot be targeted when we try to bring them back to the funnel.

This is primarily because Facebook is not allowed to save user behavior data beyond a certain period.

Facebook will be deleting the user behavior after a certain number of days and you cannot revive the data back as per the GDPR guidelines for advertising platforms.

Though Facebook says, it deletes the data in 180 days, if the user is inactive and has not engaged with ads, visited the website, and performed any actions on the website, then – the user behavior data eventually fades from the Facebook.

Because we have our e-commerce clients reporting that the campaign performance begins to drop in 21days.

If you want to retarget the users who showed interest and want to bring them back to the funnel, then the only way is to collect and save the user behavior data i.e.First-party data.

BFCM is 5 months around the corner. If we start building the audiences who visited your site and showing an interest we can push those audiences to Facebook during the BFCM and holiday season sale.

After a recent conversation with one of our clients named Wildelements, we got acquainted with their approach. They are now building email lists to capture people’s interests. And are collecting emails to gather zero-party data from those interested in learning more about them. Although this is an interesting approach, not many people would be interested in sharing email addresses; perhaps around 8-10% would be a great conversion ratio.

If only we saved those visitors who came to our website, all the users who did not share their email addresses still can be segmented and activated when they want to engage those users.

From relying on ad platforms or Pixel to track the website visitor behavior data to owning the same is a major shift that is of utmost importance and the need of the hour.

Also, the audience who reside in the mid-funnel are the ones who visited your website and showed interest in purchasing. And more than 70% of the potential buyers are stuck in the mid-funnel.

Activating these mid-funnel audiences by segmenting them based on their behavior and engaging in various ad platforms will help the buyer make the decision.

Having said that, the mid-funnel audience is most ignored and overlooked as if there is a written protocol to do so.

Breaking down the unsaid marketing rules about the mid-funnel campaigns

From bringing in users from the flashy and crazy top funnel campaigns, it is equally important to nurture the mid-funnel users who have shown interest.

Check out how smartly you can micro-segment the audience using first-party data to drive double the sales and revenue.

We have one of our clients who implemented mid-funnel audience strategies and created two audience segments: one using first-party data and Facebook pixel data.

How could Facebook match 80% of the audience using first-party data?

When we say, first-party data, it is more than an email id, contact number, form-filled, and CRM.

Anybody who visits your website is first-party data. Apparently, 95 – 98% of the website visitors are anonymous and only 2 – 5% of the visitors are known.

At CustomerLabs CDP, we help you collect both the anonymous and known visitors’ data and run on various ad platforms.

Like we distinguish known visitors and anonymous users, we collect certain information from both. Along with the first name, email id, and demographics, we also collect Browser ID, Click ID, IP address, User-agent, Facebook ID, Google ID, etc of both anonymous and known users.

📌 Split the marketing budget across the funnel

There are no rules that the marketing budget needs to be split in a certain way. Since the top funnel campaign is being considered the most important and so 80% of the budget is being allocated to the top.

But what we would rather suggest is, to split the budget across the funnel like 50:30:20 to the top, middle, and the bottom.

Check out the case study of India’s leading fashion brand on how they doubled the ROAS 2X by activating the mid-funnel audience and splitting the marketing budget across the funnel.

Yes!! There are some standard internet famous fashion audience segments. But what we  think is we can segment the audience even more efficiently with the first-party data.

But these are the generic audience segments for the fashion marketer to focus on.

✔️ Bring back the one-time buyers who purchased 1 year back and re-activate & nurture them.

✔️ Users who visited the candles and decoration lights page 270days ago. (or any other specific product)

✔️Users who have products on the wishlist 270days ago.

Read more on how fashion e-commerce marketers can micro-segment their audience for personalized engagement and double the sales.

Along with the top-funnel interest-based campaigns, the marketers can double-focus on activating the mid-funnel high intent audience.

98% of website visitors are anonymous. Segment these visitors based on their behavior and run personalized ads to convert them.