Impact of Google’s Android privacy update on the marketers 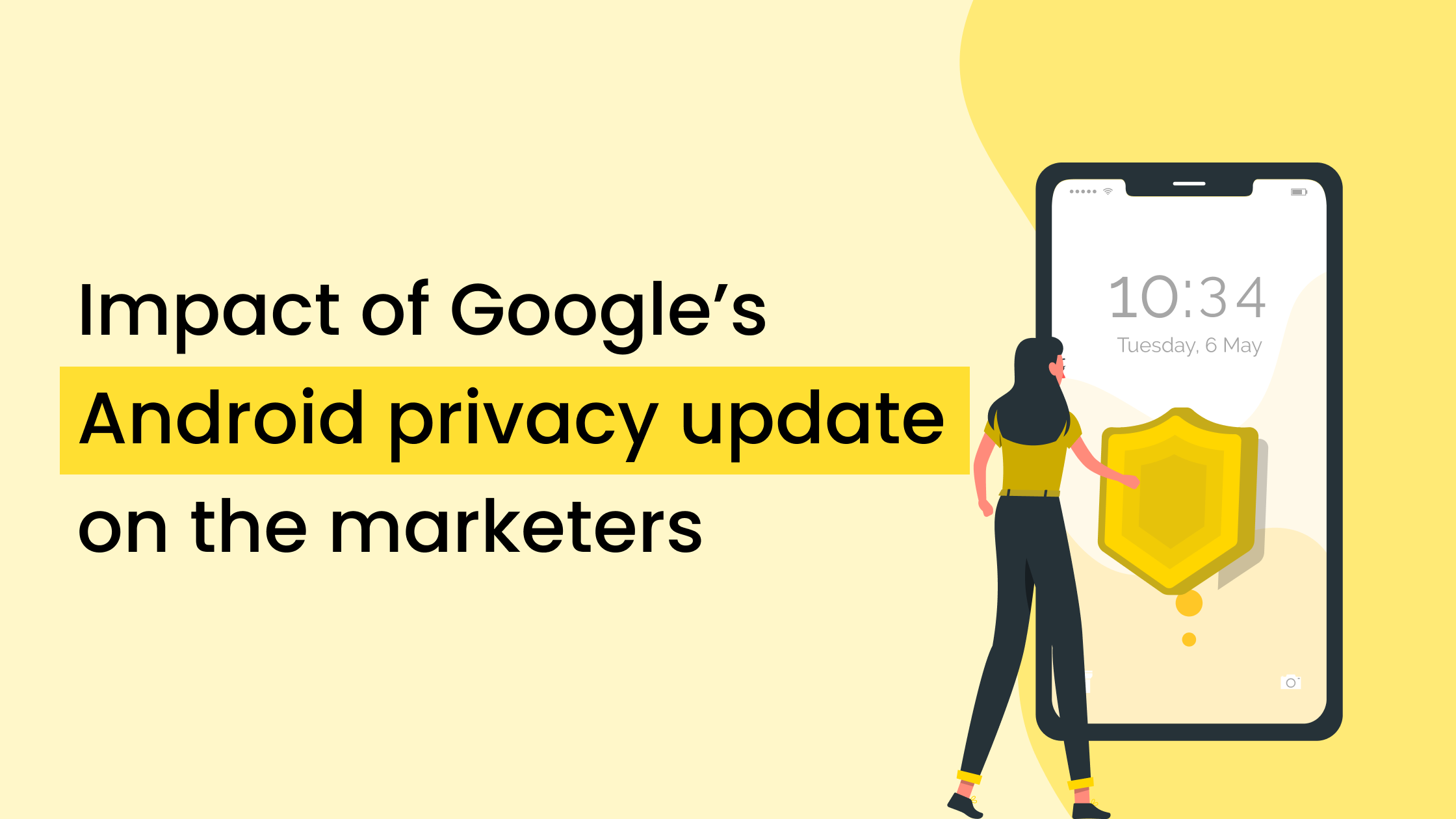 When marketers are recovering and accepting the iOS’14+ update’s commotion, the next headlines are live that Android is going to restrict its user behavior sharing with third-party.

Google’s Privacy Sandbox initiative overall is not new; as it was primarily launched with a focus on protecting user privacy in the Chrome/web environment by phasing out third-party cookies. And the recent announcement just extended the scope of Privacy Sandbox to include in Android in-app environment.

The Google Advertising ID(GAID) will be removed, when a user opt-out of personalized advertising (formerly known as interest-based advertising) in the Android settings.

Precisely, the update says, the advertisers won’t have access to user behavior information when the user opt-out of tracking from running personalized ad campaigns upon him. The user-behavior sharing is restricted to third-party from interest-based advertising to attributing the campaign results.

While the main catalyst for these initiatives is to protect and guard user privacy.

Marketers’ merely had a worry about user behavior data back then. Like, Facebook pixel tracks the website traffic information, and the marketers went on the audience manager and set up the campaigns.

Then it was primarily about setting the target audience right, optimizing the cost of the campaigns, etc.

The privacy concerns began when GDPR, CCPA, and other legal bodies began questioning user behavior regarding data sharing via third-party without the user’s consent.

Later, in Apple’s recent iOS’14, they introduced App tracking transparency which gave the iOS users a choice to opt-out of tracking.

In the iOS’14+ update, when the user opts out of tracking, Facebook and other advertising platforms have limited access to iOS user behaviors.

Impact of iOS’14+ update for the marketers:

Before marketers would understand the concept of App Tracking Transparency (ATT), the iOS update was rolled out and the impact slowly hit the retargeting ad campaigns, Facebook custom audience match rate, and the whole revenue game itself.

When a user lands on the website, they perform various actions and events. Rather than segmenting them based on their demographics, and age group, they could be segmented based on their website behavior/actions.

For instance, if a user has viewed a couple of products in the footwear category, and left the page, we could segment and retarget them like “visited product page less than 3times” with messaging relevant to them that brings them back to the site.

Since Facebook has limited access to iOS users, tracking & understanding their behavior for  segmenting them is an impossible task.

Also, in the majority of businesses, the retargeting audience size has reduced beyond 60%.

As mentioned already, the retargeting audience size has reduced and the Facebook custom audience match rate has decreased to a new low like never before. i.e.25% from the total audience size.

With a poor match rate, the cumulative effect is that the ROAS has scratched rock bottom and is relatively reduced. All these are impacts of iOS’14+ update only.

The overall impact of Android’s privacy update among marketers

69.74% of the world population are Android users which is approximately 2 Billion people.

The above stats explains the magnitude of the impact when Android users opt-out of tracking.

The Android update will have a greater impact than what Facebook saw with Apple giving the users the option not to be tracked. And the advertisers are expected to lose 15-25% of the revenue with the post-identifier for Advertisers (IDFA) changing due to lesser visibility on the full funnel activity and user behavior.

⚫ Attribution gets tougher and meaner

The attribution has already been an issue among the advertisers due to the issue in reporting on Facebook, now, post IDFA changing, advertisers will lose the ability to attribute revenue and experience the reduction of lifetime value and the effectiveness of LTV models without deterministic attribution.

⚫ Missing out on mid-funnel activation:

The website visitors in the mid-funnel are the users who have performed certain actions like product_view or wishlist or so. Now the retargeting ad campaigns to convert these visitors into purchasers will be challenging, as the users have the choice to opt out. This limits the overall funnel visibility and the retargeting audience size will be shrunk.

If we watch this closer, all these issues are around the data collection as the advertisers or marketers have been relying on third-party like pixel tracking for collecting their user behavior data.

And the only solution left is to start collecting the user behavior data i.e.First-party data.

First-party data is the future

All the privacy updates at the end, imply, the use of advertising platforms for advertising & running ads only and own your user behavior data i.e.first party data.

This lets marketers understand how users interact with their businesses and help analyze their behavior.

First-party data is just more than email id, phone number, and of course more than just the purchaser’s details.

Anybody who falls and stumbles on your website and performs any action like viewing the products or adding products to the cart or wishlist is also first-party data.

When these collected and unified first-party behavior data are sent to Facebook using CustomerLabs CDP, it easily improves the custom audience match rate by 2X to 3X.

We did an experiment between Facebook Pixel data and First-Party data custom audience match rate to check which was better.

Like mentioned above, 98% of your website visitors are anonymous. Even just 2-3% of conversions from anonymous visitors, can up your store revenue by more than 2x times.

You can segment your anonymous website visitors based on the user behavior,  re-activate and bring them back into the funnel.

Few segments anonymous website visitor activation segments you could use are

👉 Cart_abandoned for more than 30days

👉 Segment the users who have wishlisted for more than 10 products

Read here to more on advance segmentation for your activating the anonymous website visitors.

The majority of the users in the mid-funnel are the high intent audience who can be nurtured and pushed to the bottom of the funnel. But these users are stuck in the middle of the funnel.

👉 Cart_abandoned for more than 30days

👉 Segment the users who have wishlisted for more than 10 products

If you do not have time to read the entire piece of the blog, then these pointers are for you.

👉 Like the iOS’14+ update, Android is coming up with restricting the user behavior sharing with third-party. Retargeting audience size reduced by more than 60% after the update.

👉 69.7% of the world are Android users and Android’s privacy update will have a greater impact than what Advertisers saw with Apple’s iOS’14 update.

👉 Advertisers are expected to lose 15-25% of the revenue with the post-identifier for Advertisers (IDFA) changing due to lesser visibility on the full funnel activity and user behavior.

👉 And the only solution is to start collecting your own user behavior data i.e.first-party data and become your own customer data host. Google and Facebook have been active promoters of first-party data collection to stay ahead of the competition.